Recently while driving in the car into downtown Atlanta, the on-air hosts at a radio local station were talking about “bad boys” and why women seem to lose all self-control when they fall for one.

My husband and I listened to the women calling in about their stories. We listened to the conversations and one stuck out in particular. A girl called in saying that she had plenty of “normal” guys asking her out but they were just too boring. What she really wanted was a bad boy that called her and treated her nicely.

Dale and I just looked at each other and laughed. Was she serious? The whole point of a bad boy is that they are BAD! They don’t call. They don’t bring flowers. They don’t take you to nice restaurants. They don’t treat you with respect. They don’t want you to find out about their other girlfriends. They are BAD.

I must admit, I was one of those delusional girls that used to be attracted to the bad boy persona. Why? I think most women who are involved in these types of relationships either a) think they can change him, b) think that he will see that they are more special than the other girls he’s dated, or c) they’re delusional. In my case it was all three…I was wrong about (a) and (b) but I was totally on target with (c).

I asked Dale what he thought. He pondered the question for a moment and said “I think girls want guys that ultimately treat them bad because they love the drama and they fear that being with a nice guy will bore them to death.”

But I do think that age has something to do with it too. The girl that called in was 22 years old. When I was 22 years old, I still thought that a gourmet dinner out was to be found at Macaroni Grill and that wine in a box was totally acceptable.

Think of it this way. Dating a bad boy is equal to having a fantastic night out, where you’re doing tons of tequila shots and dancing and laughing and having the time of your life. But your date doesn’t have any money so you put the whole bar bill on your credit card. And then the next day you wake up and you’re so hung over that you don’t think you’ll feel better until you throw up a kidney. That’s how a bad boy can make you feel.

Seriously girls! Didn’t you read “Shades of Grey??” (Spoiler alert!) Anastasia Steele fell for Christian Grey because he was handsome and debonair, but ultimately found out he was the baddest boy of all…and came to her senses by the end of the first book. (Now seeing how she was also into all that kinky whackery, she ultimately went back to him but she had a lot of bad boy drama in her life from that point on.)

“Do you think you’ll ever wish you had a bad boy instead of a computer programmer?” my cute husband asked me. “Because I can totally be bad.”

I looked over at my sweet husband and I tried to picture Dale being a bad boy, but all I could see was Darth Vader wearing an argyle sweater vest and carrying around a Mac instead of a light saber. It doesn’t work. Which is a good thing; because I love the fact that he brings me flowers and takes me to the best restaurants. I love that he doesn’t order the cheapest wine on the menu. I love that he prefers Sperry’s to black leather boots and an SUV over a Harley. I love that I don’t have to worry about where he’s been or if he’s going to call.

Now don’t get me wrong. He’s definitely not a pushover either. He lets me whine and complain about stuff but he definitely lets me know when I’ve reached my daily limit. He occasionally wears all black. He has a leather jacket. He rides a mountain bike instead of a motorcycle. And although he doesn’t carry around a light saber, I know he will always be there to protect me and keep me safe.

So my advice to that 22 year old girl from the radio station? Take note…reconsider dating a nice guy. They’re actually pretty awesome!

You may think you’ve found your own personal Christian Grey by dating a bad boy, but in the end, your heart will just end up more tangled up and spanked than Anastasia Steele’s backside.

Many of you have followed up with that post by asking me about online dating.  Well, here’s my advice and two-cents, which really isn’t much.  After all, it’s only two cents worth so don’t sue me.

If you have read my previous posts, you will know that I was a long time resident of Loserville.  A ten year resident, to be exact and after a friend convinced me to try Match.com where I met the love of my life, I packed up my things and moved out of town for good.

PLEASE PLEASE PLEASE don’t think that I am calling anyone else a Loser for not being married or in a relationship.  I call myself that simply because I was so ready to meet someone that I easily would have settled for Mr. Close-But-Not-Exactly-Mr-Right, or at some points, even just a human, breathing male.  But I got lucky this time.  Or it was divine intervention.  Either way…

Trust me.  If there’s FourSquare in Loserville, I’m pretty sure I’m still the Mayor.

I met my husband three years ago on Match.com.  Many times when I tell people that they get this shocked look on their face as if to say “What were you thinking by dating on-line????”   Well to be honest, it wasn’t my idea.

I was a 10+ year Realtor who was suddenly faced with limited commissions when the housing bubble burst. I had a client who wanted me to list the house I had helped her purchase five years earlier because she had gotten engaged.  I met with  her and we talked about the house and our lives.  She said she had gotten tired of the single life and her teenage daughter talked her into going on Match.com.  I just giggled and thought to myself  “I may be a total dating loser, but I could never do that.”

I’m serious, I was a LOSER.  If there was another loser within a five mile vicinity, I was completely enamoured with him.

After she realized I was still painfully single since the last time we had talked (FIVE YEARS EARLIER) she said “I won’t give you my house listing unless you promise to go on Match.”  I got nervous.  What if someone I knew were to see me on a dating site?  Would my loser dating status just be confirmed?  Would it be embarrassing?  What kind of guy would sign up for online dating?  A serial killer?  Someone already married?

Then reality kicked in.   I started thinking of the fact that my mortgage and car payments were coming up and how desperately I needed the commission.  I reluctantly agreed.

I put my profile together and realized that it was sort of like writing about myself as if I were going into a catalog.  Interests?  I like camping, triathlons, anything outdoorsy but I’m still girly-girl enough to enjoy getting a mani/pedi on occasion.  Smokers?   Nope – not interested.   I did want someone who went to church but not someone who was going to make me feel horrible about a cuss-word slip up or a glass of wine.  I was also very serious about my political views (but won’t post them here!)  but I knew we definitely needed to agree on politics.

For about three weeks I received messages from some of the most interesting people I’ve ever come across.  (One guy actually sent me a picture of himself dressed as Abe Lincoln ….and another wearing a Superhero helmet.  One guy sent me pictures of his house.  One sent pictures of his pit-bulls.  One sent a picture of himself from what appeared to be 1985 leaning against a Trans Am, looking like Tom Selleck with the thick mustache.  But at least I didn’t receive a message like another friend of mine who I later found out was also on Match – her potential suitor immediately wanted to know her weight because he needed to ensure that she wouldn’t put them over the weight limit on his motorcycle if they were to get together.  Nice.  That one was definitely a keeper…said no one.)

Just when I thought I was destined to be forever single, the picture of the one that would steal my heart popped onto my computer screen…and the rest is history.  I sent him a “wink” which is sort of a computer cat-call.  He responded within a few hours with a long e-mail, to which I promptly replied.  We began e-mailing each other several times a day and then within a week moved up to phone calls before deciding to meet in person.

We decided  to meet up at a park where we could be out in public but we could talk and see if there was any chemistry.  If we didn’t like each other we wouldn’t be stuck sitting through a very uncomfortable dinner.  Meeting at the park was perfect because I had just gotten out of a cast after breaking my foot but was still scheduled to participate in a triathlon three weeks later. We could talk and exercise at the same time.  If there wasn’t any chemistry, one of us could just leave.

When I pulled into the park, I saw that there were two vehicles matching what he said he drove.  Both drivers got out at the same time:  one was in good shape, had a great smile and was dressed in black, and the other guy was wearing a dirty t-shirt and cutoff blue jeans, and looked like the only exercise he got was lifting twelve Budweisers a day.   I remember saying a little prayer that the fit one was my guy…and thankfully he was.

We thought we were going to only walk about 2 miles that afternoon since my foot was still healing but when I turned on my iPhone and checked out my pedometer, I realized we had walked 7 miles.  As I got in my car to go home I called my mom.  I told her I knew this one was “the one” and we would be married within six months.  Little did I know…

Some people might think it was crazy of us to get married after knowing each other for only 12 weeks, but somehow we both knew we were a match made in heaven.

Finding the love of my life at an online dating website is something that I never could have imagined.  I used to think online dating was for the most desperate daters and although I easily fell into that category, I was completely in denial.  Why do online dating sites have such a bad reputation?  It’s really isn’t much different than being set up on a blind date through friends.  People realize you have something in common and you meet.  Sometimes it works out – my parents met on a blind date and just celebrated their 52nd wedding anniversary.  Sometimes it doesn’t work out…but even then you at least  gave it a shot.

Who knows?   You may end up meeting your perfect match and living in your own love story.

And every love story is unique and amazing.  Ours is just my favorite. 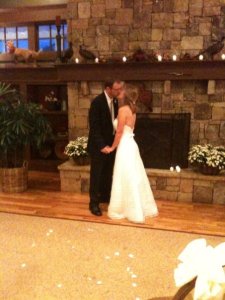