Saturday was the kind of day that makes you smile.

Dale and I woke up early to participate in a 5k fundraiser for Tripp Halstead, a local child who was severely injured last October when a tree branch fell on him.

We got up around 6:30 AM to begin getting ready. Those of you who know me already know that I am NOT a morning person, and 6:30 comes quickly when you normally go to bed around 1 AM.

Dale gulped some coffee. I shoved a pack of chocolate chip Little Bites muffins down my belly and we headed out the door.

Since I had my stitches out from my Melanoma back in March, my doctor had told me to take it easy on the running because I could still damage my scar for up to a year after surgery. I have been walking on the “dreadmill” and through the neighborhood when I haven’t been worried about melting, but I only got the okay from my doctor to start running again about three weeks ago.

I have competed in nine triathlons and numerous 5k races, but I was about to find out how not being able to run for three months had taken a toll on my body…and my ego.

I knew I would probably be a slow runner so I went to the back of the crowd and waited for the race to start.

The whistle blew. People started moving. Some people were walking, some were jogging. My headset started spitting out my favorite 80’s tunes and I slowly started to run. 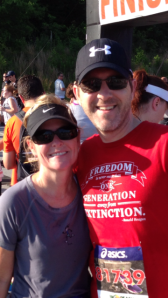 Mile one came and went. I looked down at my pedometer. I was running at a pace of 13 minutes per mile. So far, so good.

Mile two came and I noticed that my legs were really getting heavy. Did I somehow contract polio this morning?

Was I carrying $50 in change in my pockets or something? It was getting harder and harder to put one foot in front of the other.

I checked my pedometer again.

Good. At least I was getting close to three miles.

And that’s when it happened.

A rush of people came up from behind me and blew right past me like I was standing still. Two moms were pushing strollers…one with TWINS in it. They were chatting away like they were sitting at a coffee shop while I was gasping for breath and sort of making choking and gurgling sounds. My face was so hot I thought I might spontaneously combust at any moment.

Suddenly, up ahead, I saw it. It was as if the heavens opened up and the sun started to shine down.

It was the golden arch of the finish line.

I picked up the pace. Woo-hoo!!! I was back to being a runner. It took everything I had not to punch myself in the shoulder in a “way to go” fashion. I was so proud of myself!

That is, until a seven-year-old girl with pigtails and pink “Hello Kitty” sneakers flew past me like the finish line was an ice cream truck and she had some dollars to spend.

I have some serious training to do.