I always joke with him because HE IS 45. I think he just wants to not feel older than I am especially since he is already getting AARP literature in the mail or it could be that when he doesn’t shave his beard he starts to look like Wolverine from x-Men because it’s turning gray.

It’s never seemed to bother him much, however, yesterday afternoon I think he finally understood my frustration with getting older.

We were in the car heading down to see my parents for the afternoon. I was driving, and Dale was in the passenger seat working on his laptop. Since my dad has been going through chemotherapy, his taste buds have become a little skewed and so we decided to stop at the Varsity and pick up some of their famous “Frosted Orange” drinks. He loves them and they are strong enough for him to taste so I love surprising him with them.

We pulled up to the Varsity and waited in line. When I ordered the drinks through the intercom, I asked the lady taking my order not to fill up the cups to the top. I just wanted them filled up enough so when she put the lid on them, it didn’t squirt out the top of the cup.

Dale just looked at me and said “You sound like Meg Ryan in ‘When Harry Met Sally’. You know how she ordered her food and had a zillion conditions to go with it – “I’ll have the Caesar salad but I don’t want croutons, and I want the dressing on the side”. The lady taking your order is going to think you are a nut.”

So I decided to explain myself to her when we drove up to the window.

“I’m so sorry for being so picky. My dad loves these, and since he is going through chemotherapy, we have to be really careful about not letting anything touch his food, so I didn’t want the cup filled up because I didn’t want it to squish out on your hand when you put on the top.”

She did look at me like I was a nut.

But then she smiled, leaned out the window, looked at Dale and said “Is that your father?”
I choked on my diet coke and some of it ran out of my nose.

Dale leaned over and looked at her, smiled and said, “Uhhhh no. I’m her HUSBAND.”

She never missed a beat. “What kind of cancer does your dad have? Is he being treated here? I had breast cancer and beat it. I hated chemotherapy. I lost my sense of taste too. And I lost my hair. I’ll say a prayer for him”, she said.

I then thanked her and we drove off.

I giggled some more.

“Doesn’t it stink for someone to think you’re older than you really are?” I asked. I think at that point he understood why I never want to be labeled older than I actually am.

Dale just growled at me.

I remember a quote from “Steel Magnolias” where Dolly Parton said “Time marches on, and sooner or later you realize it’s marching right across your face.”

Especially when someone thinks you are your wife’s dad.

For years I was not a good cook. Not because I didn’t know HOW to cook, but it was hard because cooking for only two people wasn’t always easy. (I’m REALLY not good at math so dividing recipes was a nightmare. Sorry, Mrs. Wylie, but that math tutoring on fractions you helped me with in high school DID NOT stick with me).

My son, Matthew, was always pretty easy to cook for because all I needed to do for him was boil water for his beloved Ramen noodles. Water is boiling? Dinner’s ready!

My friends from my previous employer all knew of my poor cooking skills. (I have been rumored to burn water and I MAY or MAY NOT have made a grilled cheese once, forgetting to add the cheese). On one company trip, the Vice President came to our condo stating that she had been told I was cooking…with vodka…and she was a little nervous. No need to worry, I told her. Turns out, I was a pro at making jello shots!

When I got remarried I was sort of forced to fine-tune my cooking skills. Now, not only was I going to be cooking for five people, but there were now food allergies being thrown into the mix. My step-son, Austin, has Celiac disease, so he can’t eat anything with gluten. My step-daughter, Bailey, has a nut allergy and also eats only gluten free food, and my husband can’t have MSG.

Oh, the joy of cooking…yeah, right. Not ONE of my new family members can eat Ramen noodles…it’s chock full of gluten and MSG.

Making two to three different meals for one dinner time isn’t easy, so I began to get creative with recipes so that I could make variations of the same meal. 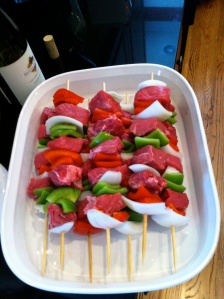 I realized that most ingredients can be easily substituted with gluten free products. This past week I made shrimp scampi – one with regular breadcrumbs, and one with gluten free breadcrumbs. It was a hit. Austin gave it two thumbs up and actually asked for me to cook it again sometime. That was a shock because he is extremely picky…I never know what he is going to like or not like.

Bailey’s favorite meal is my homemade fettuccine Alfredo. The Alfredo sauce is naturally gluten free, but I use GF pasta for her and regular pasta for us. She asks for it every time she is over at our house and it makes me smile because it’s something special that I can make for her.

Cooking gluten free can be a bit frustrating for someone whose favorite foods always start with “enriched flour” in the ingredient list, but I’m learning. And there are still days when I throw a piece of fish in the oven because the kids don’t want to eat what we are eating, even if it can be made GF.

I recently got a nice compliment from the kids. Bailey asked her mother if she could make some of the recipes that I make for her when she is at our house because she loves my cooking.

I found that cooking can be very rewarding when people actually like what you’re spending the time to cook, so taking the time to find out what they love is worth its weight in homemade gluten free pumpkin pie.