I recently realized that my phone doesn’t ring any more. It just “pings.” That is, I only notice my phone when I’m getting a text message. I actually dislike talking on the phone so I don’t really mind it when someone texts me instead of calls me.

But there are lots problems with texting. Just ask my friend, who texted her husband a sexy message about what she wanted to do with him after he got home from work.

Problem was, she didn’t text her husband.

She texted her best friend’s husband.

And she found out about her error when he texted her back. Fortunately, he found the whole thing hilarious and didn’t text her back with some skeevy and perverted response.

My problem with texting seems to be the “auto-correct” feature, where the phone thinks you have misspelled a word and changes it to one it thinks you are trying to write.

One evening, I was sending a text to a friend about a triathlon I was participating in, and I suggested that she sign up as well. It was called the “Acworth Women’s Triathlon.” However, the autocorrect feature decided that Acworth was a misspelling, and changed the word to “scrotum.” So the text that she got indicated that I was participating in the “Scrotum Triathlon.”

You can imagine our hysterical laughter when she sent me a reply that she wasn’t sure that was a triathlon she wanted to participate in, but she found it ballsy that I was going to do it.

I have learned that before sending a text message, I need to read it thoroughly to ensure there are no mistaken auto-corrections. 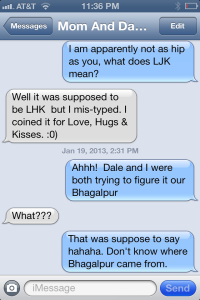 And then, there is my mother, who just got an iPhone about a year ago. We introduced her to texting and were thrilled that she actually caught on rather quickly. She picked up the texting lingo and abbreviations, and uses LOL (laugh out loud) often. However, sometimes she would send me cryptic messages that I couldn’t understand. Come to find out, she was just making stuff up.

To which her mother replied, “Well that’s fantastic!”

(For those who are not in the texting world, WTF does NOT mean “Well that’s fantastic!”)

The lesson here is that whether you are a novice or veteran text messager, just be sure to read what you are sending and also confirm it’s going to the right person.

Otherwise, that message you are trying to send to your friend saying you are ditching work so you can hit the lake might actually end up going to your boss.

And then you might get a reply of “WTF?”, and no, that wouldn’t be fantastic.