One hundred years ago, a little baby girl named Mary Evelyn Gunn, known to her family as Aunt Sissy, was born in a big white house in Enterprise, Mississippi. She was the beloved sister of her five brothers (two older and three younger), one of whom was my grandfather, Frank Carlton Gunn, affectionally called Bubba. 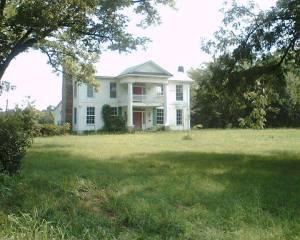 Little did her family know then, how many lives she would touch in her life time.

Many of those family members gathered this past weekend to celebrate her life and her 100th birthday at that same white house, named Riverside Plantation.

All week, I had stressed over how I was going to manage making it from Atlanta to Enterprise to join in the celebration. My husband is in the process of getting his masters and had a huge project due and we realized it would be too risky for him to make the trip in case he couldn’t finish his work on time.

At the last minute, my son and his girlfriend decided to drive up from college in south Georgia to make the trip with me. He had never seen the old home place but had heard about it for years. I welcomed the company and was thrilled that they wanted to be a part of the occasion.

As we pulled into the grassy yard, Riverside stood tall and proud, albeit a bit weathered. Two tall white columns flanked both sides of the front porch, welcoming visitors into the foyer. Built in the early to mid-1800’s, it has seen better days but the sight of it still overwhelmed me. I had been to the place only twice before, but this time, I was older and truly appreciated and understood where I came from. Two chimneys flanked both sides of the house. The green shutters had faded as had the once bright red door, but the beautiful decorative transom windows were still intact. I could hear the squeals and laughter from children who were playing on the balcony above the front steps.

I thought of my grandfather and my great-uncles and Aunt Sissy as they played in the front yard as children. They had climbed the trees, worked in the garden, tended to the livestock, and swam in the Chunky River nearby. I was confident that if I listened hard enough, I could probably hear the ringing of the dinner bell and the voice of my great-great grandmother calling everyone inside the house for dinner. 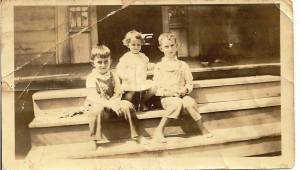 My grandfather, Aunt Sissy and Uncle Kiddo on the front steps of Riverside.

As we walked in, Aunt Sissy sat in a chair in the very room that she was born in, grinning as those who came to celebrate with her stopped to wish her Happy Birthday.

The hardwood floors creaked as people walked around, soaking in the history that has made up the house, wishing the walls could tell us stories of those who lived here. Before the Civil War, the house was owned by a man who was a Mason. When Union soldiers took over the house, they found a box (supposedly full of valuables) wrapped in Masonic papers. With many Union soldiers also being Masons, they stood by their vow to never cause harm to a fellow Mason, thereby ordering the other soldiers not to burn the house or steal anything. They then turned the home into Union headquarters, where they planned the Battle of Vicksburg from the front parlor. The home is now on the National Register of Historic Places.

There is a book called Riverside Remembered by Wallace Neal Briggs, Aunt Sissy’s cousin, who everyone called “Buster.” His story tells about the times he visited his beloved Riverside, starting when he was only six years-old. For those of us who were not around during that time, it has been a beautiful way to learn about Mammy and Pappy, my great-great-grandparents, along with Allie and Cally, my great-grandparents. I have also learned about my grandfather as a young man, before he met my grandmother. What a rare gift to be able to treasure events in his life long after they occurred!

In addition, the book tells about Mattie Riley and her son Leroy, their black neighbors who helped at the house who were really just part of the family. Sissy and Mattie were especially close, since Mattie had taken care of her since she was a child.

One of the most cherished moments was when Mattie’s grandson, Floyd, arrived at the celebration and handed a photograph of Mattie to Sissy. I wish I could have frozen in time the moment Aunt Sissy saw the photograph – her delighted expression clearly showed the love she had for her and how much she missed her.

Throughout the day, all of the family laughed and told stories of parents and kids and simply loved being there. I hope Aunt Sissy looked around and realized that the people who were there, were there because of HER family – each one of us being a child, grandchild, great-grandchild, niece, nephew, cousin or other relative.

I watched my father laugh with his brother and sisters. I watched my son and nephews look for rusty old railroad spikes by the Chunky River. I laughed with my cousins, some of whom I had not seen in over 25 years. 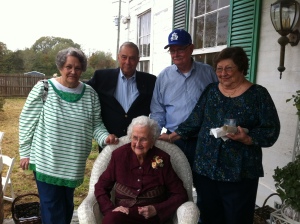 And as the children of my cousins ran through the house and people mingled about sipping coffee and eating birthday cake, I felt the house shake. Some would think that a 150+ year-old home shaking wouldn’t be a good thing, but I felt otherwise.

To me, it felt as if the home was happy and giggling because after way too many years, it was once again full of the love, laughter and life of the Gunn family.