Last month, we decided to take the kids up to Gatlinburg, TN for a weekend mini-vacation. Hopefully we would see some snow like we did three years ago. We had woken up the morning after we arrived to find everything covered in snow. It certainly would be fun if it snowed, but we knew we would still have fun even if it didn’t. (Hey – we live in the South and didn’t even get a dusting here this year. We get excited about seeing snow!)

We got up early, loaded up our SUV with kids, pillows, blankets, suitcases, phone chargers and iPads.
We were ready to go. I like driving, so I hopped in the drivers seat and we took off.

We had been on the road for about an hour when the “Check Engine” light came on.

I mentioned it to Dale but he didn’t seem too nervous about it. Our SUV is 11 years old, so lights come on and off all of the time. The “Check Engine” light being one of them. But this time it stayed on.

We had just crossed into North Carolina when I asked Dale if he could drive for a while so I could shut my eyes. Since I was up packing into the wee hours of the morning the night before, I was a little groggy and needed a quick power nap.

Less than five minutes after we switched drivers and just as I was starting to doze off, it felt like Dale was tapping the brakes – while going up a hill.

“I’m not doing anything!” Dale said. “Something is wrong with the car.”

Now since he is always playing jokes on me – making it seem like we have a flat tire, or we are out of gas, etc., I usually don’t worry too much. But this time he was serious.

We pulled over on the side of the road. In the middle of NOWHERE.

I wanted to cry. It was cold outside. I was exhausted. I REALLY needed a nap. Except now we were stuck. I knew that the hill we were heading up lead into more of nowhere. If we could turn around and coast back down the hill, I remembered seeing a mechanic shop somewhere before we switched drivers.

Dale turned the car around and we rolled down the hill.

As if Heaven opened up and a stream of light shone down with Angels singing, suddenly, right in front of us, was a mechanic shop. And it was open on a Saturday. Hallelujah!

We rolled in the lot and a guy who looked eerily familiar like someone from the movie “Deliverance” came over to check on us. My first instinct was to lock the doors but it turned out, the look was the only similarity. This gentleman was genuinely kind and concerned that we were headed out of town and were now stuck at a garage.

He put his other works in progress on hold and helped us out.

Unfortunately, he finally realized that the truck was going to need a part – a part that they didn’t keep in stock, and wouldn’t be available until Tuesday. The mechanic called the local rent-a-car company so that we could get back on the road.

One of the interesting things about breaking down in nowhere was that the only rent-a-car company was called “Rent-a-Wreck…and it was, in fact…a wreck.

We headed out in a 2003 (yes, it was 10 years old) Chevrolet Cavalier (no, they don’t even make those cars anymore) with 140,000 miles on it. It shook if it got over 60 MPH and it smelled like dirty feet. I would not be surprised if a body had been transported in the trunk at some point.

But it was a car that worked when ours didn’t.

A week later, our SUV was repaired and we were told we could come pick up it up.

So, our “inexpensive” weekend getaway with the kids ended up costing about $1,300 more than originally planned. But we all had a blast, even if it didn’t snow. The kids (and Dale!) played Magi-Quest; we rode go-carts in the freezing cold; and we watched not-yet-released movies while snuggled up in our hotel beds. 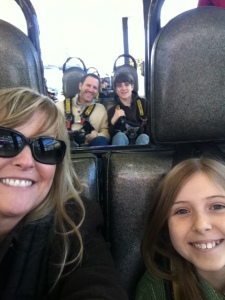 It was then that I suddenly realized that no matter what the final cost of the trip was, these memories actually were….

6 thoughts on “Crying On The Shoulder Of The Road”